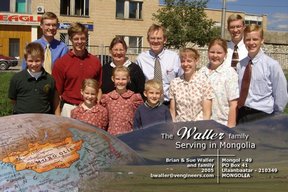 Enjoying the fulfillment of a dream that my parents have had since they were first married, our family had the opportunity in 2005 to serve overseas in the nation of Mongolia.

Located between Russia and China, Mongolia has a land size a little smaller than Alaska, but with only 2.7 million people. About one million of these live in the capital city of Ulaanbaatar.

Invited in the year 2000 by national and city government leaders, the Character Training Institute [2] of Oklahoma City began a branch office in Ulaanbaatar, for the purpose of teaching character, teaching English, and developing character-based training materials.

Arriving in Mongolia in the summer of 2005, my family and I served with the CTI-Mongolia staff until November of 2005 when Isaac’s [3] unexpected death necessitated our return to America.

Returning to Mongolia the following January, we continued serving with CTI until the summer of 2007. We then moved to Oak Brook, IL, where several of the older children are currently working for the Institute in Basic Life Principles [4], a non-profit Christian ministry dedicated to helping youth and families around the world.

Our ministry together as a family is so diverse that it is probably best described by reading Adam’s past Prayer Updates [5].