If you had asked me last Saturday morning what I planned to do for Easter, I would have had no idea that the next morning I would be folding up a blanket on top of an air mattress 160 miles south in the little town of Waegwan, and heading out to Camp Carroll Army Base for an Easter Sunrise service. 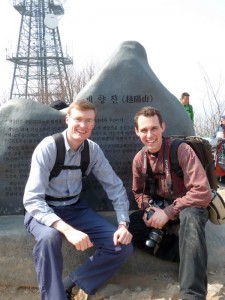 [1]But the Lord knew much much I needed that little encouragement, and had already been preparing the way. James Staddon [2], a friend from West Virginia arrived here in Korea just a few days before the rest of my family flew over to Mongolia at the end of March. I stayed back to work on some pressing projects at the Korea office, and James came to help with some design work that was also needing to be finished.

Enjoying good fellowship in our work together, James and I also took time for the occasional hike in the mountains and visit to the Korean War Memorial. James’ father had served in the US Air Force and was stationed at the Osan Air Base a few years after the close of the Korean War.

This was James’ first visit to Korea, and seeing the Osan Air Base was one of the things that he wanted to do during his month here. In the Lord’s providence, it just so happened that James learned of a good friend in the US Army that was currently stationed in South Korea, and James and I were thrilled to accept Andy’s invitation to visit the Osan Air Base.

The date was set for April 23rd, and James spent some hours poring over Korean subway maps, working out the 40 mile route to Osan. The adventure of traveling public transportation in a foreign country is hard to understand unless you have been there, but it definitely adds to the excitement. Most of the signs, announcements and instructions are in Korean, so you learn to be a keen observer of others and piece together what information you can find. 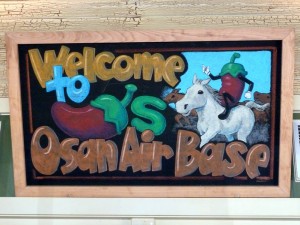 [3]Meeting Andy and Renae at the main gate, James and I were escorted onto the Base. This was my first time on a US military base, and I was amazed at the size and well-kept condition of the premises. It was like being in a little America.  🙂  The sidewalks were level, the streets free of trash, and people pumped their own gas at the gas station. They even had American restaurants built right on the Base!

Andy and Renae treated us to lunch at Chili’s. Whew! I hadn’t eaten a lunch like that in six months! Afterwards Andy drove us around the base and showed us the airfield. James also wanted to see the chapel where his Dad had attended years ago, so our tour continued up and down the little streets of the Base. 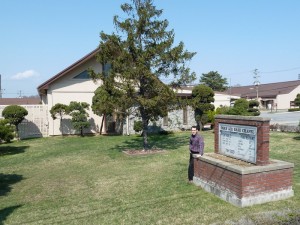 [4]With perhaps 20,000 people at the base, I guess I was a little taken aback by the chapel. A small sparsely maintained building probably built in the ’70s stood in stark contrast to the large modern churches seen all over Korea. 20,000 people serviced by a chapel that seats 281? What does this say about the spiritual interests of the sons of the very nation that brought the Gospel to Korea?

Sitting down with Andy and Renae for a soda after our tour, I began to get a little more of a picture of the hunger for real spiritual fellowship so often faced by Christians serving in overseas military bases. In a year and a half that Andy and Renae have been in Korea, they have only had one American visitor to their home.

“Oh, we should have planned ahead and had you guys come down to our home for Easter!” Renae remarked. Andy’s eyes met mine as he inquired, “Do you have plans for tomorrow?” I looked across at James. No, we didn’t have any particular responsibilities… We hadn’t exactly prepared for an overnight stay, but I knew the fellowship would be mutually encouraging, -and a grand adventure for James.  🙂 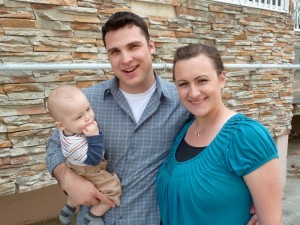 [5]A few minutes of discussion and a phone call confirmed the decision, and James and I climbed into Andy’s Ford Escape for the three hour drive south to Camp Carroll Army Base near Daegu. Andy works at Camp Carroll, but makes occasional trips up to the much larger Osan base for supplies not available locally.

The time passed quickly as James and Andy reminisced on their times together years ago, and Andy went on to share about his experiences as an officer in the Army. I asked him how he was able to stay strong as a Christian during his time in the Service, and found his answer of particular interest.

Spiritual Survival in the Service

A. Put your flag down as a Christian. Be the first to let your comrades know that you are a Christian.

B. Let your light shine. Clean language will be the first thing that others notice. Know what you believe, and be prepared to share with others.

C. Get in fellowship. Get involved in a Bible study where you can have regular times of spiritual fellowship and accountability with other guys. This is essential. Without this fellowship, you will not be able to make it.

Both Andy and James’ father had been greatly benefited by ministry of the Navigators [6], a Christian ministry that majors on discipleship and personal spiritual growth.

It was nearly 10 PM when we arrived at the apartment, so we settled down for the night, setting my alarm for 5:30 for the Easter sunrise service. The next morning I stepped out into the chilly morning air, thankful for the borrowed coat, and Andy escorted us onto the Base. We joined about 60 others on cold concrete benches in the outdoor amphitheater. 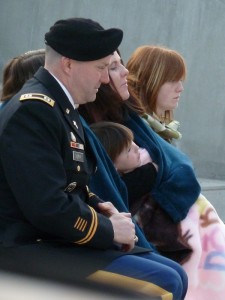 [7]Slowly rising in the eastern horizon, the sun began casting golden beams over the top of the building as we sang about that glorious morning 2,000 years ago. As the chaplain reached the close of his message, the sunlight had descended to illuminate the rough wooden cross, now decorated with flowers. It was a moment to remember.

Returning to Andy and Renae’s home for breakfast, we enjoyed more fellowship together before setting off on a drive through the nearby mountains. Spectacular views for a young man that spent most of his years in the American Midwest, the mountains were much larger and extensive than those near our office in Gimpo.

Purchasing train tickets for our return journey proved to be a little more complicated of an endeavor than I initially anticipated. The electric Metro trains are cheaper than the diesel express lines, so I was trying to figure out the cheapest route by connecting to one of the Metro lines half-way to Seoul. 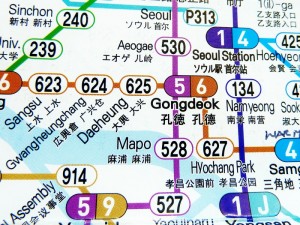 [8]Sitting in the back of the office at a conference table with a few of the station workers, I figured out what was making my metro map so difficult for these men. I had one of the rare multi-lingual English ones, but the other names were in Chinese, not Korean. Noticing our delay, Andy came in and helped us obtain the needed tickets. It would be standing room only for the second half of the ride, but the train would take us all the way to Seoul.

Winding through the mountains and thundering through tunnels, the train ride gave a fascinating panorama of the South Korean countryside. What a special way to spend Easter! I am so grateful for the kind hospitality of Andy and Renae, and the beautiful weather the Lord afforded us for the trip. This was an Easter that I will not soon forget!