Here in South Korea it has been fascinating to hear the first-hand stories of families affected by the Korean War. Although there was much tragedy and suffering, there are also incredible stories of courage and commitment, and miraculous evidences of the Lord’s hand of care and protection during some of Korea’s darkest hours.

Last evening I was talking with Mrs. Kim over dinner, and she shared the story of her parent’s escape from North Korea during the Korean War. It was October of 1950, and Mrs. Kim’s father served in a public office in the city government in Yeon-an, a city near the border of South Korea. His supervisor perceived that the war was coming to a close, and the situation was becoming increasingly dangerous for people living in North Korea.

All men 18 and over were being conscripted to join the North Korean army, so this sympathetic supervisor worked to move his non-communist staff over the border to an office in South Korea. Mrs. Kim’s father took advantage of this opportunity, and successfully crossed over with his 15-year-old son, a daughter, a nephew and another boy on a “one week” leave.

Back in Yeon-an, Mrs. Kim’s mother was growing more and more concerned. The war dragged on and on as she struggled to care for her two daughters and 10-month old son. Growing rather indignant at her husband’s irresponsibility to leave her alone with the children, she began contemplating a risky escape to South Korea to join her husband. She concluded that it would be better to die trying to escape than to be left to raise a family with no husband and father in communist North Korea.

Courageously stepping out with two young daughters and a baby boy strapped to her back, she began the journey to join her husband. But traveling with children was not easy, and Mrs. Kim’s mother was caught by the North Korean soldiers. Charged with fleeing the country, they were immediately put in prison. The loud cries of the baby echoed through the prison into the night sky as they tried in vain to sleep that night.

But the Sovereign hand of God did not allow them to perish in imprisonment. That very night a senior Japanese officer just happen to visit the prison and heard the loud cries of the baby. Angry that they would be so cruel and heartless as to imprison a mother and baby, he sternly reprimanded the guards. I don’t care if they are trying to flee the country, he told them, you are to release them immediately!

Awed by this unexpected deliverance, the mother and children continued on to the coast where private boats were being used under cover of darkness to carry people over to South Korea. Trudging through the long mud flats with her children, they sought for a boat to take them over. But every time the other passengers saw them, they strongly objected. The baby that had saved them from prison was now a dangerous risk. If anyone made a sound during the crossing, everyone’s lives would be in jeopardy. 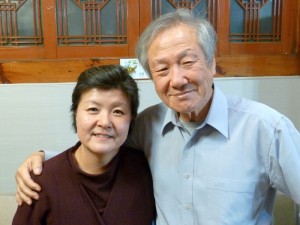 [2]Back and forth across the mud flats the mother trudged, her hope fading. Physically exhausted, and in great pain from a broken wrist from a fall during their travels, the mother stared across the rippling waters into the blackness beyond. With no hope of a boat willing to carry them, there was no way they could make it. Perhaps she should just wade into the water and drown. “Mother, don’t die.” The small voice beside her startled the mother. How could her daughter have known her thoughts? Taking her daughter by the hand, she turned back to the mud flats to try again.

But the Lord had not forsaken them. He had a plan for their lives that was yet to be accomplished. Finding another boat in the darkness, the mother appealed to the captain for passage. She did not have the high price required, but she gave him everything she had. The older man looked with compassion at the mother and children, and over the objections of all the other passengers, agreed to take the family on board. And there the miracle happened. The baby slept peacefully and did not make a sound the whole night!

Going from just a few scattered verbal directions, the mother somehow located her husband and son, and what a joyful reunion it was! It seemed too good to be true, but the Lord had something even more wonderful in store for them. There in South Korea, one by one, the entire family came to Christ for salvation, and today Mrs. Kim and her husband are being used of the Lord in some very special ways.

What a blessing to see the hand of the Lord working through prior generations to preserve our lives and prepare us for the opportunities set before us! What an awesome responsibility to faithfully use what God has entrusted into our hands!

“You will never know how much it has cost my generation to preserve your freedom.
I hope you will make good use of it.” — John Quincy Adams