It was 1:15 in the morning when the boarding announcement came over the speakers at the Incheon airport in South Korea. I joined the crowd of weary travelers to board the plane for Mongolia. High winds that morning had delayed the plane coming over to Seoul, detaining our departure by seven hours. A rather frequent occurrence in the springtime, I gathered from my discussion with a Canadian businessman sitting beside me in the airport terminal.

[1]Nevertheless I had much to be thankful for as I presented my boarding pass and made my way down the gate to the aircraft. Our travel agent in Korea had called our office to apprise us of the delay, so I had made the most of these extra hours before leaving for the airport with Mr. Moon.

The rest of my family had arrived in Mongolia at the end of March, but preparations for the first Korean Basic Seminar and related technical projects necessitated my continued efforts in the Korea office. But twelve days could be spared for a visit to Mongolia to spend some time with my family in this unique country. Lydia and Samuel would celebrate birthdays that week, and I know this season of life as a family is both brief and precious.

But the Lord had another blessing in store for me as I took my seat on the airplane. The lady next to me was on her way back to Mongolia from Tokyo with her two-year-old daughter. The poor little girl had been traveling for seventeen hours, and was completely exhausted. A family picture and some words of encouragement helped put the mother at ease, knowing that I was not bothered by her baby’s crying. 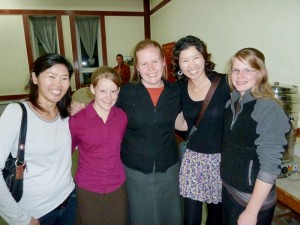 [2]As our conversation turned to what my family was doing in Mongolia, the lady’s interest deepened. Gerelay said that she had seen in on TV how people would go to a [church] and they could just talk to God and share the burdens of their hearts. She wanted so much to do that, but didn’t know how.

Tears came to my eyes as I experienced the joy of sharing the good news of the Gospel to a longing soul that had never before heard why Jesus died! It seemed so wonderful that Jesus would take the punishment for the bad things we have done, so that we could be restored to a relationship with God. She wanted to visit our apartment and talk more, so I left her with some contact information.

Gerelay was thrilled to accept our invitation to come to church with us on Sunday, and asked if she could also bring her two sisters. It was her first time to attend a Christian church service, and the preaching was from the book of Acts, outlining one of Paul’s sermons. “Wow, that’s amazing!” she told me, “Those are the same things you were telling me on the airplane! Did you plan that?” 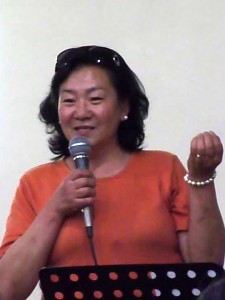 [3]We invited Gerelay and her sisters to our home for lunch afterwards, and talked again for over an hour, sharing as clearly and simply as I could the message of the Gospel. It was all so new to them, but they were so hungry for the truth! Gerelay and her sister came back to join us for the evening church service, this time bringing her sister’s husband.

They came back again on Monday night for the Basic Seminar follow-up course and were impacted by the testimonies that were shared. One lady was a former Shaman, deeply involved in spirit worship, but had been set free from the fear and bondage of this false religion. Praise the Lord for His working through an airplane seating assignment to bring the light of the Gospel to a family so ready to hear the truth!

Time with family was wonderful! There was not much room at our place in Mongolia, so I rolled out a bed on the floor of the office each night. Quarters were small, but that had no relation to the ministry opportunities abounding all around us. Sarah and Samuel were teaching at a Korean Missionary Kids school two days a week, while Dad led the follow-up course meetings and Financial Freedom seminar. 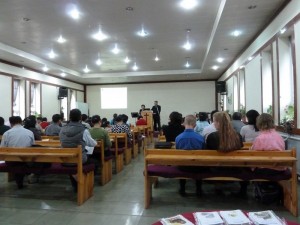 [4]Translation is under way for the Financial Freedom textbook, a manual outlining Christian principles for managing finances. Sodoo, one of our staff, explained to me that currently there is only one book available in the Mongolian language that talks about finances from a Christian perspective, so this comprehensive manual will be very helpful for Christians all over Mongolia as it explains concepts so different from those taught during 70 years of communism under Soviet rule.

During my visit I had the opportunity to attend a Christian Symposium event, marking the 20-year anniversary of Christianity in Mongolia. In just twenty years, the number of Christians has grown from almost zero to tens of thousands. It was touching to hear the testimonies of some of the pioneer missionaries that came to Mongolia in those early days. 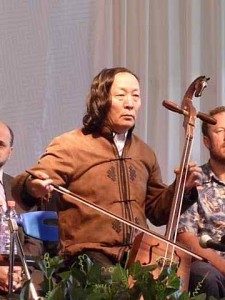 [5]After the fall of communism, the Russians pulled out in a single day, leaving the nation to fend for itself after 70 years of having the government provide everything for the people. Stores were empty, people would stand in line for hours to buy bread. Even the most basic medicines were all gone. And yet missionaries came, braving these difficult circumstances for the joy of bringing the Gospel to those who had never heard the name of Jesus.

Korean missionary Dr. Hwang told of being forced to move 40 times in those early years, and of having windows broken and stones thrown by Mongolians upset with foreigners disrupting their country and thrusting their nation into poverty by taking away socialism. But still the missionaries persisted, knowing that the love of Christ would ultimately win the hearts of the Mongolian people. Dr. Hwang’s voice broke with emotion, tears streaming down his cheeks, as he rejoiced to see this glorious day with hundreds of Mongolian pastors and Christian leaders gathered to thank God for His work over the last 20 years in Mongolia. 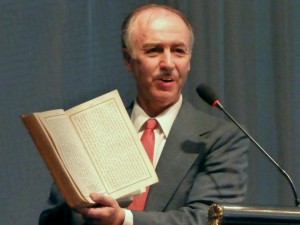 An Alaskan man came to present to the Mongolian Christian leaders the oldest known Mongolian Bible in existence today. This 1846 New Testament bears tribute to God's work in this nation over previous generations.

What made the event so touching was that we knew a number of these people. In the slide show we saw pictures of Pastor Enkhee, a bold Christian leader in the early days that had preached at Isaac’s funeral, and Pastor Dugermaa that prayed over us as we left in 2007. Officiating the event was Batjargal, the director of a Christian radio station where I had participated in some radio broadcasts in 2004. It was this man that drove our family out to the burial site for Isaac on the day of the funeral.

It was also a joy to see Ewen, the man that I had helped some years ago to make the Mongolian Bible available electronically for the first time in Mongolia. He is now on the committee for the Mongolian Bible Society, and working hard to finalize an important revision for the Mongolian translation. Right now there are no Bibles left to be purchased in Mongolia, and Ewen and a handful of others are working as hard as they can to finalize some typesetting issues so that more Bibles can be printed and brought in to Mongolia.

Here are some brief video clips from the Symposium.

Rick Leatherwood and his wife were some of the first missionaries to arrive in Mongolia in the early 90’s. Rick went on to oversee the team that translated the Mongolian Bible used by most of their churches today. The translation was completed in 2000, and a container of 10,000 Bibles was brought in for the people of Mongolia. Within 24 hours, they had completely sold out.

Margret Currie came to Mongolia in the early days when food was difficult to obtain. In this video excerpt, she shares some of their experiences trying to purchase eggs. Margret went on to be involved in a prison ministry, reaching out to men in prison that were dying of starvation and exposure while doing forced labor in the rock quarries.

This missionary from Austria shares some of her firsthand experiences in Germany and Mongolia. These are the kind of stories that you don’t hear from the media! Her whole message was excellent, but I was only able to capture the last four minutes in this video.