Just one week ago on Thursday night, I was awakened at 1:30 AM from a light sleep to a two-way radio ring, and a moment later I heard David’s voice, “Adam, can you come over here?” Slipping on a pair of sandals and grabbing my coat, I quietly crossed the hall to the other apartment.

Derrick was talking on the phone, and David met me with tears in his eyes. His broken voice almost whispered “Isaac didn’t make the flight.” I looked down by the phone, and saw the words “Brain hemorrhage” written by David’s trembling hand just a few moments earlier.

Slowly the realization came over me that my dear twin brother Isaac was with the Lord. Waking Rachelle and Sarah, the five of us each had the opportunity to talk with Mom and Dad, and then we gathered in a circle to pray.

Tears flowed freely as each of us poured out our hearts to the Lord, thanking Him for the twenty-five years that He had given Isaac to our family. My dear friends, I want you to know that there at the throne of God we found grace to help in our time of need.

Deciding to wake the four younger children at 6:00 AM to share the news, we quietly went back to our rooms to try to rest until morning.

Everything had happened so quickly, and so unexpectedly. Just a few days before, we were excited to see some improvement in Isaac’s leg. He had been in bed for just over a month with what appeared to be an infection in his left leg. After three antibiotics, the blood tests showed no infection, but still the pain lingered on.

Then it seemed that things were improving. The swelling and redness was going down, but other symptoms began to appear. Increasing pain in the kidneys, headaches and strange bleeding indicated that something was seriously wrong. Responding to our call at 5:00 AM, Dr. Choi came out to see Isaac, and further blood tests were done in the morning.

By early afternoon on Thursday, I had returned from an errand to hear that preliminary results were coming back from Isaac’s tests. His white blood cell count had gone from a normal range of up to 10,000 to an unheard of 375,000! We were advised to get Isaac on a flight to Beijing or Korea as quickly as possible.

Here we began to see Lord’s hand working as we raced to get Isaac on the evening flight to Korea. Through and incredible series of events, Isaac was on the plane in 50 minutes, on the way to Seoul. Things happened so fast that I was not even sure who had gone with Isaac until after they had left.

Mom and Dad were both able to be with Isaac, and in his last hour, he was able to look out the window and watch the setting sun. The next morning I wept as Samuel chose the hymn “Beyond the Sunset” in our family time together.

Throughout this whole experience, we have seen God’s great lovingkindness in more and more ways. After further examination of Isaac’s case in Korea, the doctors have confirmed that Isaac had a very rare form of leukemia. A cancer doctor only sees this type about once in ten years.

Because the symptoms are so strange, it is extremely difficult to diagnose early and even in the world’s best hospitals, there is very little that could have been done to slow the rapid advance of this variation.

This actually brought us much comfort as we realized that Isaac’s body had been fighting this disease for probably the past year. If we had known of it then, there would have been little that we could do for him, and it is very likely that we would not be in Mongolia today.

Instead, God raised up this chosen vessel to bear the testimony of the Lord Jesus in the land of Mongolia, and for four months, our family enjoyed the fulfillment of my parents’ dream to one day serve together on the mission field.

If Isaac had become sick and died in the States, we would have been grieving together, and perhaps his life would have been a challenge to some. But here in Mongolia, we are seeing how God is using Isaac’s death in perhaps an even more powerful way. At the funeral on Wednesday, Pastor Dugermaa wept as he read a poem he had written of Isaac’s life.

Isaac had given his love and energy to the people of Mongolia. He had given his strength and youth, and given until he had given his very life and body into the soil of this land. Across Isaac’s tombstone was graven in English and Mongolian the verse “Greater love hath no man than this, that a man lay down his life for his friends.” John 15:13

Isaac had laid down his life, and served his last days to bring the message of hope to the people of Mongolia. What greater love could Isaac have shown for the One that had sent His Son, Jesus Christ, that the people of every kindred and tongue and nation might one day stand before His throne in paradise, redeemed unto God through the blood of Jesus Christ.

Some 250 people attended Isaac’s funeral at First Church of Ulaanbaatar. Representatives from several churches, missionaries, friends, neighbors and students from our character classes comprised a wide variety of people from all walks of life.

Especially touched were those who do not know Christ. One mother and daughter that have attended our Character-English classes came to share their condolences. The daughter just burst into tears and sobbed. Without Christ, Isaac’s death would have been just an untimely tragedy. Pujaa translated for me as I shared the hope and confidence that I will see my brother again.

Another unsaved student came to the viewing, funeral, burial and reception time. Although she is a strong Buddhist, she seemed to be very deeply impacted by what she saw. She had a long talk with the assistant pastor of one of the local churches.

The missionary community also seemed greatly touched by Isaac’s testimony. Families that we have never really met rallied together to provide meals and support for us. The home-school organization furnished the reception, and their leader laid aside a busy schedule to assist us in organizing the services.

Of the funeral itself, it was like none that I have ever attended. There was an air of hope and confidence that shone through the unexpected sorrow like sunbeams through the clouds. No one could miss how special Isaac was to each one of us, and no could miss the fact that he was prepared to meet the Lord.

Dad and the older children each shared how their lives have been impacted by Isaac’s selfless example of giving to others. I shared on the verse from Psalm 112 that “Unto the upright there ariseth light in the darkness…” We have a hope and confidence that has been with us through this time, and we are seeing the light of God’s purpose shining brighter and brighter each day.

Isaac’s life has been a consistent testimony of a young man that served God all the days of his life. I have no regrets about our family coming to Mongolia. If I had to do it over, there is nothing that I would change. Although we have seen much fruit through Isaac’s life, I believe that God will bring even more fruit through the testimony of his death.

“Verily, verily, I say unto you, Except a corn of wheat fall into the ground and die, it abideth alone: but if it die, it bringeth forth much fruit.” John 12:24

Right now our family is making plans to travel back to America on Monday, November 14th. We plan to spend a couple days in Chicago, then travel up to our farm in Wisconsin to prepare for a memorial service for friends and family.

God is working in some amazing ways as we work out our travel details. Yesterday the airline office told us that our round trip tickets had been canceled and we would have to buy new ones, but the the Lord has worked these things out, and we are actually able to travel together on the preferred Monday flight that will allow us to make a non-stop flight from Beijing to Chicago.

Tomorrow will likely be very full with our Character English classes in the morning, and packing and preparation in the afternoon. We leave early on Monday morning, so pray that we could have a productive day on Saturday, and a restful Sunday before the trip begins. 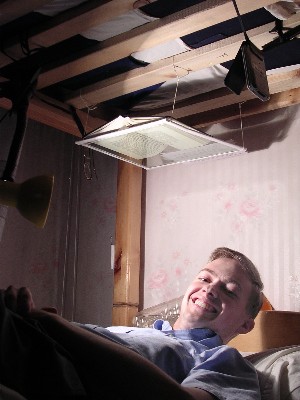 One of the last pictures I have of Isaac, taken just 8 days before his death, as little as we imagined it at the time. Above him you can see his last creative project, a reading stand that enabled him to read several large biographies while laying in bed. Even while often in pain, his smile was a real encouragement to each of us. 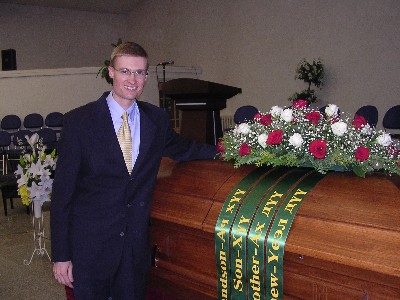 I am so grateful for the confidence that we have as Christians. Although it is hard to say goodbye, I know that I will see my dear brother again. 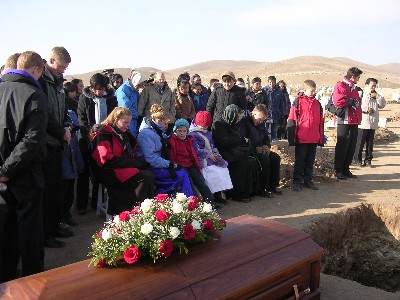 Even with temperatures at 0 degrees (F), about 75-100 people came out for the burial. 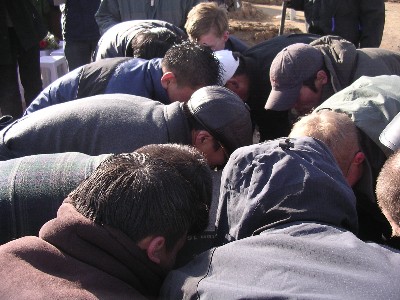 A group of men strain to lift the gravestone. We ordered it the day before, and the workers had worked all night to inscribe Isaac’s name and the verses, finishing in time for the funeral on Wednesday. 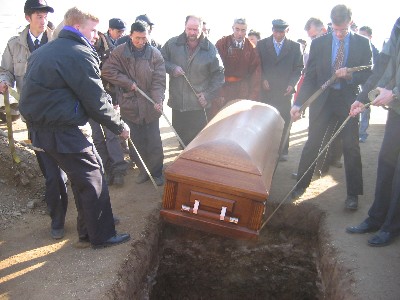 There was no professional pulley system used to lower the casket, but with Jim’s coaching, we were able to get the job done smoothly. 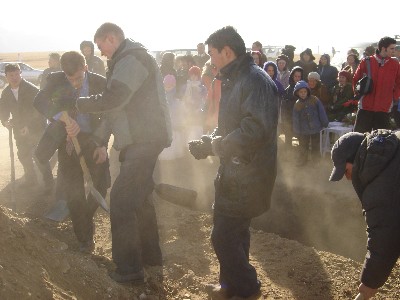 Working to refill the hand dug grave. The physical work adds an element of reality to a burial in Mongolia. 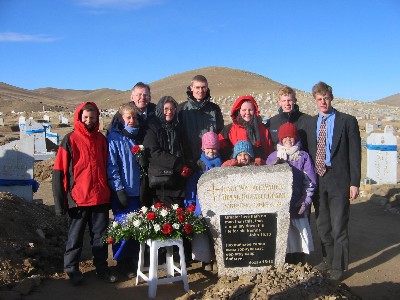 On the inset black marble, we had the words of John 15:13 inscribed in English and Mongolian. “Greater love hath no man than this, that a man lay down his life for his friends.” 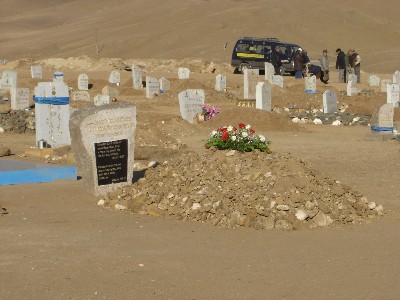 Isaac’s grave stands in lasting tribute to his service to the Lord in Mongolia. The hope that we have was such a contrast to the group of men in the distance performing a Buddhist burial. Isaac was buried next to the grave of Pastor Enkhbayar, a well known Mongolian pastor that died a few weeks ago.

Thank you so much for praying for our family in this important time!

“And let us not be weary in well doing: for in due season we shall reap, if we faint not.” – Galatians 6:9