A week ago today, I loaded my suitcases into the trunk of the rental car, leaving St. Paul Minnesota just before 5 AM, I started on the longest trip that I have ever driven. Thirteen hours is probably not much for some of the road veterans out there, but for a guy that had never driven longer than a couple hours at a time, it was a new experience.

I had brought a stack of cassette tapes to help keep me alert on the drive, but discovered that the rental car was of a little more modern design, only having a CD player. With some more prayer as I started out, I saw God’s hand of faithfulness with me all the way. The full size Buick Century even got 35 miles to the gallon, saving me extra fuel costs. – An answer to prayer.

Enthusiastically greeted in Oklahoma City by David Isaac and Rachelle, it was great to join in on the projects and work teams at the Character Training Institute. I am primarily focusing on some computer work with Jonathan Camenisch, but it has been great to be involved in a number of other projects as well.

I know that a number of you had been praying about the computers that I was wanting to purchase last week. I had found some computers on eBay that seemed like exactly what we needed in Mongolia, and bidding in the last minute of the auction, Derrick and I were able to get six computers for an average of $47 each! Four of these are for Mongolia, and I trust that God will use them to be a blessing to the team over there.

I also wanted to share a little update on the work permit situation in Mongolia. In my last update I described how God had answered prayer in giving us favor in the eyes of the authorities, and everything looked clear for my family and I to join the team in Mongolia in the next few months.

The day after I sent my update, further meetings with the Mongolia Labor Department officials took an unexpected direction. While the Minister of Labor was very understanding and supportive of our work, we were told that she really did not have the authority to go beyond the provision of the law and grant us permission to obtain work permits, unless we could prove that we specialized in teaching a foreign language.

We are currently in the process of applying for a certificate from our District Manager that officially states that we teach English as a foreign or second language. I find it very interesting that teaching English is actually one of the three purposes of CTI-Mongolia, as described in our NGO statement.

Even more amazing is the fact that while we were not seeking this objective, the Mongolian government leaders had insisted that we have this purpose listed in our NGO document! So often it is in the very things that we don’t understand that we later see the hand of the Lord working through our authorities for our good and His glory.

We also learned that they would be willing to give a work permit to my family and I in place of work permits of staff that are leaving in the next few months. (Since we would still have the same number of work permits as we did on January 12th, when the resolution was passed.)

So, in summary, it looks like the Lord is continuing to work out this situation, and while we don’t have the final word, I trust that God will work things out for good according to His purpose and will. It sounds like many of the other organizations may be waiting until the law is reviewed again next year, rather than attempting appeals to the Prime Minister and President just before the national elections.

This week in Oklahoma City we are hosting a conference for the Oak Brook College of Law, so it looks like it will be a full weekend. There is a possibility that I might be assisting one of the guests over the weekend, so pray that the Lord would give me wisdom as I focus on His priorities in my final week in the States.

– Praise the Lord for allowing us to purchase all six of the computers that we bid on last Wednesday! My family was able to pick them up today, and the one we purchased the week before is already running as the family computer.

– The Lord has been using this time in Oklahoma City to be a great encouragement to me as I see His hand at work in many little ways. The divine appointments to share a word of encouragement with someone, and the ability to help out in areas of need continue to confirm the Lord’s direction in my time here.

– Praise the Lord for working out the final details for my airline tickets. I am scheduled to fly out of Oklahoma City on Saturday morning, April 30th, and arriving in Ulaanbaatar, Mongolia on May 1st.

– This Saturday my twin brother Isaac and I are scheduled to take Dr. Gothard to the Diamondback Correctional Facility in Watonga, OK for a two hour meeting with inmates from the “Faith Pod.” These inmates are all from Hawaii, and have recently been through the Basic Seminar. Pray that the Lord will use the time to be a real encouragement to them, and that He will give wisdom to Mr. Gothard in sharing and answering questions.

– Pray that the Lord would continue to give wisdom as I work to prepare the server computer for CTI-Mongolia, and that He would bless my remaining days of work here before I travel to Mongolia at the end of next week.

– Please pray for my family as they travel to Oklahoma City to host a Basic Seminar in Guthrie Oklahoma next week. David is working hard to prepare for the Children’s Institute. Pray that many lives would be touched as the truths of God’s Word are brought forth. 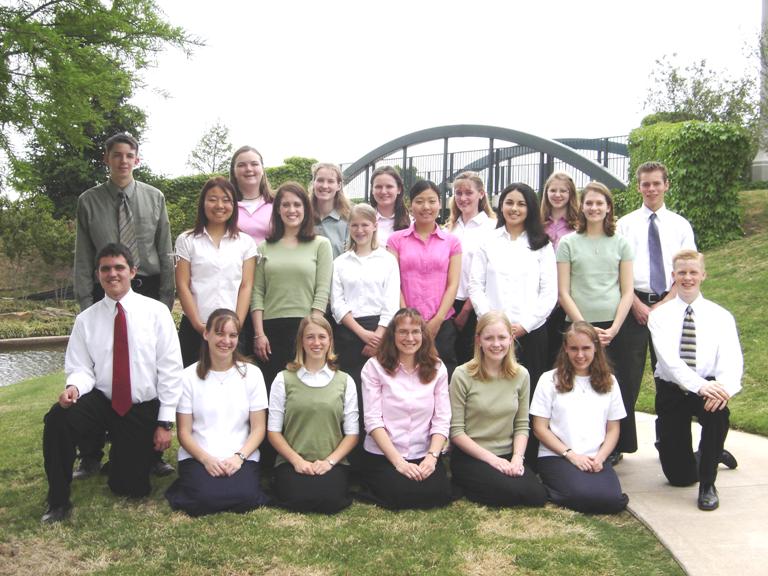 I did not have time to take many pictures this week, but I thought I would include one of the Character Coaches. Every day, this team of young people go into the public schools in Oklahoma City, teaching lessons on character, and leading after-school Bible Clubs. You can see my brother David on the far right.

It is really exciting to rub shoulders and hear what God is doing here in Oklahoma City. Two more children came to Christ at a Bible Club a few days ago. I really appreciate the Godly leadership and focused atmosphere of this outreach to the children of Oklahoma City.

“And let us not be weary in well doing: for in due season we shall reap, if we faint not.” – Galatians 6:9